International designer and manufacturer of energy efficient air quality systems. AGM. Trading: Rev for the four months to 30 Nov +7% Y/Y (constant currency), c. £112m (organic LFL, +5.5%), delivered through a combination of volume and price increases.  All three geographic regions grew organically. UK organic growth, +3.8% LFL.  “Strong growth in residential markets and good growth in our OEM revenue stream, more than offset weaker revenues in commercial”. Continental Europe, +6.4%, “demonstrating the continued attractiveness and growth of our heat recovery solutions”. Australasia, +8.5%, “driven by continued market share gains in Australia, and good growth in New Zealand”. Outlook: “We continue to see strong regulatory initiatives driven by the need to decarbonise buildings, drive improvements in air quality, and reduce damp and mould in residential homes. The group retains a strong balance sheet, with leverage at historically low levels, providing us with opportunity for potential earnings enhancing acquisitions. We are pleased with the start to the new financial year and in our ability to achieve our margin targets in the face of inflation. we are well positioned to continue to capitalise on the many structural growth opportunities in the months ahead”.

House prices. UK house prices increased by 0.7% between September and October, on a seasonally adjusted basis (non-SA, +0.3%) to £296,000, following an increase of 0.5% in the previous month, pushing the Y/Y rate up to +12.6% from +9.9% in September, according to the ONS (link). Average prices increased Y/Y to £316,000 (+13.2%) in England; to £224,000 in Wales (+11.8%); £195,000 in Scotland (+8.5%) and to £176,000 in Northern Ireland (+10.7%). The ONS suggests the stronger Y/Y rate reflects a temporary weakening in October 2021 following the ending of the Stamp Duty holiday at the end of September, when prices fell by 1.7% between the two months. Viewpoint: The October figure is unlikely to have been greatly influenced by the economic turmoil following the mini-Budget in late September; more up-to-date data from mortgage lenders, based on reporting at an earlier stage in the house buying process, indicates a degree of softening – at least in mortgaged applications (ONS data, which is based on completed transactions, also includes cash sales, which may be less influenced by interest rate rises). The house price data feeds into the UK inflation data, also out this morning, which showed CPI running at 10.7% Y/Y in November, down from 11.1% in October and below  consensus of 10.9%. This follows yesterday’s employment data, which showed unemployment up from 3.6% to 3.7%, in line with expectations and a greater than expected level of job creation. Employment and inflation are key ingredients in the housing mix. On the basis of these announcements, and gilt yields declining since September, the outlook for housing doesn’t look nearly as bad as some pundits continue to prophesy. 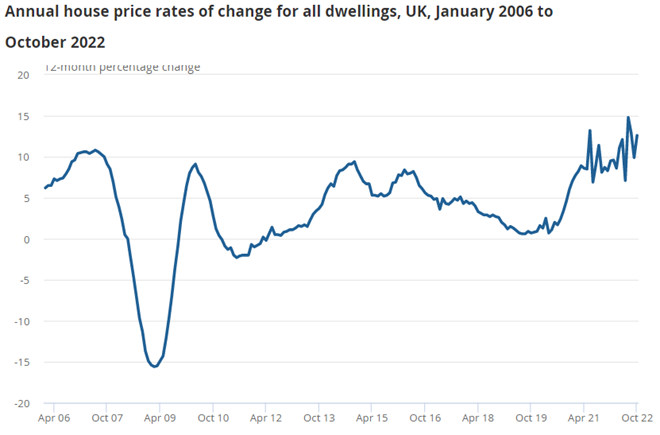 Labour costs. Average labour rates continued to rise last month hitting £992 per week, according to the industry’s biggest payroll firm, ConstructionEnquirer.com (link). The data from Hudson Contract shows average earnings for self-employed tradespeople grew by 1.3% cent during November and were 5.1% higher than the same period last year. Weekly earnings hit all-time highs in the East of England (£1,092), London (£1,041) and Yorkshire and Humber (£981) during November. Self-employed electricians earned the highest pay of all trades, earning an average of £1,199 per week.

Logistics. British Land is drawing up plans to convert a former NCP car park in the City of London into an underground  logistics hub, in the latest progress in ‘last mile’ logistics, Building (link, paywall). The leading developer spent £20m last year for the Finsbury Square car park which it wants to turn into a last-mile logistics complex. The scheme could go down underground by as much as three levels with electric vans, scooters and bikes arriving to pick up parcels for delivery around the city.