London-focused residential developer and urban regeneration group. H1 (Oct) results. Units +14%, 2,080; prices -13%, £560k (mix effect); rev -1.6%, £1,201m; PBT -2.0%, £285m; EPS -0.6%, 200p. Shareholder returns: £134m (H1 22, £486m) (dividend/B-share payment, £23.3 m (£452m); buybacks, £111m (£35m)). Net asset value per share £29.56 (£28.18); net cash, £343m (£269m); cash due on secured private sales, £2.3bn. Trading: “Since the end of September, Berkeley’s sales have been 25% lower than levels experienced for the first five months of the financial year. This is a resilient performance in the context of the current market volatility and reflects the strength and depth of demand in London. Pricing has remained firm throughout … [and] above business plan levels throughout this period and into November, with cancellation rates rising from early-teens to around 20% in the last couple of months”.  Sales continue to be split broadly evenly between owner-occupiers and investors (mainly overseas based). “Material cost inflation has begun to reduce, but this varies considerably by product.  Labour cost inflation has been benign relative to materials inflation and we do not expect labour costs to substantially increase from this point given the softening outlook for the construction sector. Berkeley Modular continues to produce the first modules at its modular factory in Northfleet, which will be delivered to Kidbrooke Village during the New Year”. The group has not added any new sites to its land holdings in this period, whilst one long-term site contracted on a conditional basis in Motspur Park has been added to the long-term pipeline. Outlook: “We are on target to deliver pre-tax earnings of approximately £600m for the year ending 30 April 2023. Matching supply to demand and, based upon current trading, we are now targeting pre-tax earnings of at least £1.05bn for the following two years (previously £1.25bn), which is likely to be slightly weighted to the first of these, in line with market consensus and the objective of delivering a sustainable pre-tax ROE of 15% through the cycle”. Shareholder returns: Commitment to £283m (260p per share) pa up to 30 September 2025 re-affirmed, with next £141m due for the six months ending 31 March 2023, of which £56m has already been returned via share buy-backs.

Some key data and announcements on key drivers in the housing market next week, including from Rightmove and ONS,  as well as economic factors that influence it, employment, inflation and the all-important Bank of England Official Bank Rate. 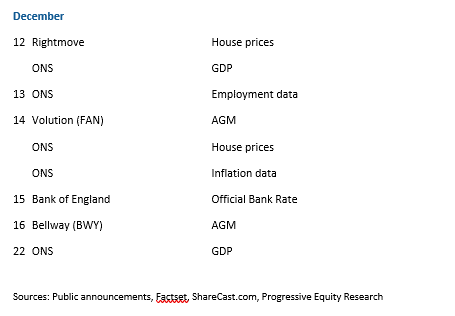