Technology enabled labour supply company for the UK infrastructure sector, listed on AIM, Feb 22. FY (Sep) results. Rev +51%, £49.5m; adj EBITDA +44%, £9.8m; adj PBT -23%, £632k; stat PBT, £161k (FY 21, £516k); stat EPS, 0.58p (-0.27p); div, 1.12p (0p); pre-IFRS 16 net debt, £5.3m (£1.7m). Trading: Successful ramp up of labour supply to HS2 Phase 1 (northern section) and new contracts won. Fleet of suction excavators increased to 20 with a further 10 due for delivery by 31 March. Organic growth achieved in Civil Projects division with an 18% increase in new clients during the period. Commenced monetisation of the Company’s proprietary digital tools through the launch of the SEE Everything Portal, which has been developed in conjunction with the Balfour Beatty Vinci Systra JV. Outlook: “The outlook for Hercules remains very positive. Turnover growth has been in the region of 50% per annum for two years now, and the directors believe a third such year of similar growth lies ahead. We are excited at the prospects for Hercules over the next few years as we seek to grow the business both organically and via selective acquisitions. Our pipeline for 2023 looks robust across all our business units and we have experienced positive trading across all areas for the first three months of our current financial year. In respect to potential acquisitions, we are progressing positively with discussions and look forward to updating the market at the appropriate time”.

Real estate investment trust owning commercial portfolio predominantly in central London. Property disposal. Contracts exchanged to sell 63,170 sq ft freehold interest in 19 Charterhouse Street EC1 to a family office for £54.0m before costs. The building, which was purchased in November 2013 for £41.3m after costs, is occupied by the London College of Accountancy on a lease expiring in August 2025. The passing rent is £2.6m pa. The disposal price represents a 4.6% net initial yield to the purchaser, a capital value of £855 psf and reflects a marginal discount to June 2022 book value. This sale forms part of the group’s ongoing strategy of reducing its exposure to smaller buildings with less repositioning potential. Proceeds will be recycled into the development pipeline of 435,000 sq ft of net zero carbon projects which are expected to deliver attractive returns.

Housing market. Vendors’ asking prices and buyer interest have bounced back in the past month after declines in the previous two in the aftermath of the mini-budget, according to Rightmove’s House Price Index (link). Asking prices advanced by 0.9% to £362k, following 1.1% and 2.1% falls in November and December respectively. The Y/Y rate picked up to +6.3% from +5.6% in December. The UK’s largest property portal registered a 55% surge in prospective buyers contacting agents in the New Year period compared with the two weeks before Christmas; and up compared to the same period in 2019. 5 January was the third busiest day ever for people asking agents to value their homes. 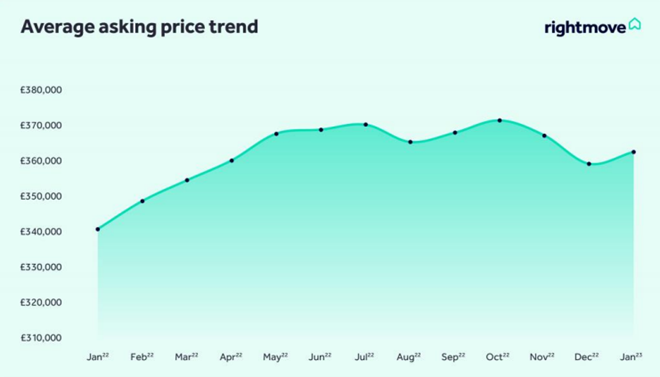