Heavy construction materials group active in the UK, Channel Islands and Benelux. Patent. The acquisition of Poundfield Products in 2017 brought a series of patents covering walling systems suitable for the construction, agriculture, sea defence and military applications. SigmaRoc has continued to develop its product portfolio with further innovations including the evolution of its Alfabloc system, a precast concrete walling system produced in the UK, Ireland, Benelux and Scandinavia. Each free-standing section can be interlocked to form a continuous wall of heights up to 6m. It has been used at for example Heathrow Airport, nuclear facilities and numerous construction and industrial applications. “The Alfabloc Mark II makes the installation and interlocking even faster and the constructed wall entirely seamless once in place. It will be produced as an ultra-low carbon product from January. The patent will allow Poundfield to continue its investment in innovative solutions”.

Construction activity. Total UK construction output rose to the highest level in five months in October, but incoming work declined and growth expectations fell to a 29-month low, according to the latest Construction Purchasing Managers Index report from S&P Global/CIPS (link). The headline seasonally adjusted PMI for M/M changes in total activity – posted 53.2 in October, up from 52.3 in September and the highest reading since May and up from the 26-month low of 48.9 in July (see below). Commercial building was the best-performing category in October (54.5), a five-month high. Residential work also expanded (51.2), but at a softer pace than in September. Meanwhile, civil engineering activity decreased for the fourth month running (48.5). Total new orders decreased slightly in October, which ended a 28-month period of sustained expansion. Around 33% of the survey panel anticipate a rise in business activity, while 26% predict a decline, the lowest net degree of optimism since May 2020. Companies surveyed reported weaker confidence among clients, including a drop in new work due to heightened political uncertainty, alongside headwinds from rising input prices and higher borrowing costs. However, instances of longer delivery times were at the lowest since February 2020. 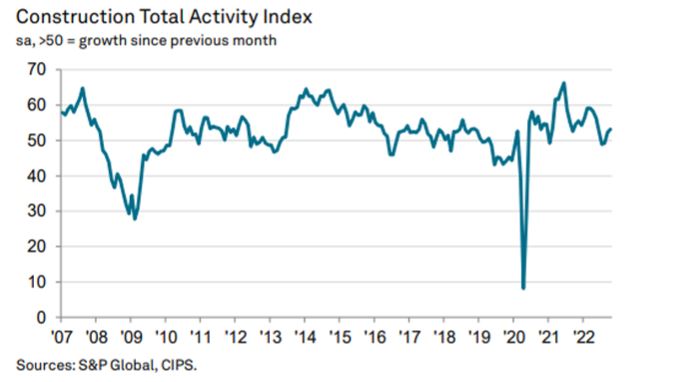 Housing market. Falls in UK mortgage rates predicted as BoE signals dovish outlook and building societies will cut the costs of UK fixed , FT (link , paywall). Banks rate mortgages after financial markets pared back their expectations of future rises in the Bank of England’s main interest rate, brokers and lenders have predicted. Mortgage brokers said the current high costs of fixed rates were set when markets had expected aggressive future rises in the base rate to counter soaring inflation, but those expectations had already subsided before the BoE signalled a more dovish outlook for interest rates in the wake of its latest base rate rise G overnor Andrew Bailey suggested markets had overcooked their predictions yesterday . of future rises, which influence the pricing of home loans, and said lenders needed to reflect this in their mortgage pricing. The Bank rate have to go up by less than currently priced into financial markets,” Bailey said in comments after the “ will announcement. Simon Gammon, managing partner at mortgage broker Knight Frank Finance, said: “We are expecting fixed rates to continue to fall back slightly — they are still overpriced because lenders don’t have an appetite for a lot of fixed-term lending right now, but with a period of stability, you can expect that to change.” Lenders’ funding costs for their fixed-term mortgages are influenced by swap rates, which rocketed on September 23, when the “mini” Budget of Liz Truss’s government spooked markets and pushed up government borrowing rates. Two-year swap rates have subsequently fallen below their 4.5% rate on the eve of the ‘mini-budget’, as markets reacted positively to the decision of new PM Rishi Sunak and Chancellor Jeremy Hunt to reverse most of its measures. But while swap rates and interest rate expectations have calmed, mortgage lenders have so far made only small reductions in their headline rates. Two-year fixed mortgages peaked at an average 6.65% on October 20, according to finance site Moneyfacts, compared with 4.74% before the September fiscal announcement. The average rate for a two-year fixed deal had crept down to 6.46% on Thursday.

Infrastructure. The proposed new Sizewell C nuclear power plant in Suffolk is under review and could be delayed or even axed, as the Government tries to cut spending, according to the BBC (link). Sizewell C was expected to provide up to 7% of the UK’s total electricity needs, but critics have argued it will be expensive and take years to build. The new Northern Powerhouse Rail high speed line, connecting Northern towns and cities from Hull to Liverpool, through Bradford, could also be axed. “We are reviewing every major project – including Sizewell C,” a government official told the BBC. The Government is due to unveil its tax and spending plans under new Prime Minister Rishi Sunak at the Autumn Statement on 17 November. However, a Treasury spokesperson said delivering infrastructure projects was a priority: “HS2 is under way, within budget, and supporting 28,000 jobs, we are also seeking to approve at least one large-scale nuclear project in the next few years and aim to speed up the delivery of around 100 major infrastructure projects across the UK”. But the new Business Secretary Grant Shapps gave the clearest indication yet that recent commitments by former Prime Minister Liz Truss were very likely to be scaled back.

Viewpoint: ‘Under review’ does not necessarily mean ‘unlikely’. Sounds a bit of government ‘expectation management’ at work; let’s wait and see until the Chancellor’s Fiscal Statement on 17 November (see below). However, on Sizewell C, ex-BoE Governor Mark Carney and now decarbonisation advocate subsequently responded to the BBC Radio 4 Today programme by asking that, if cancelled, “who will provide the base load needed for zero carbon?”. On northern rail in the same programme, Business Secretary Grant Shapps sounded more sceptical for the project going ahead in full. 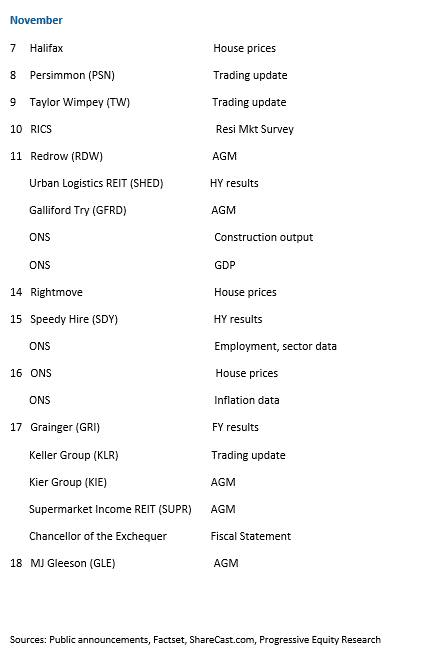 Big week ahead for impact of the ‘mini-budget’ on housing market demand and pricing indications, with stats on pricing from the UK’s largest mortgage lender and more forward-looking activity indicators from RICS; and trading updates from three leading housebuilders. (The biggest of all, Barratt, on 12 October, showed a big fall in private reservations, but pricing “reasonably firm”.)